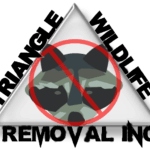 Get Rid Of Bats In Wake County, NC

Raleigh North Carolina bat removal and control keeps us very busy at Triangle Wildlife Removal, Inc. Bats in the Raleigh North Carolina are some of the most misinterpreted wildlife. When it comes to their value to our ecosystem, bats don’t receive a lot of the credit they are due. They are fascinating mammals that serve as pollinators, seed dispersers and help to control insect pests. The United States is home to approximately 45 species of bats, three of which are common in the area of Raleigh, North Carolina. Using echolocation or bio sonar, bats can find their way into the tiniest of spaces often gaining entry in an opening of 3/8” or larger. Bats are mysterious in appearance and are typically only seen at night. They are often feared by humans whose inhumane and unnecessary removal techniques threatens their population worldwide. Bats in the Raleigh North Carolina are known to form colonies in their chosen roosting areas. While in search of dark and quiet places to raise their young, bats are known to invade attics in the summertime. Each species of bat is unique and poses its own challenge for people. Triangle Wildlife Removal Inc. is your local experts for bat removal in Raleigh and Wake County North Carolina. We safely and humanely remove bats as well as bat proof your home to eliminate the chance of future bat infestation.

The most common bat species found in Raleigh, North Carolina include the Big Brown Bat, Little Brown Bat, and the Brazilian Free-Tailed Bat. Listed below is a brief description of each:

Bats typically fall into two categories, tree bats or cave bats. Most of the bats that take up residence in Raleigh and Wake County homes are cave bats. They are very adept at living among people and in making our home their home. It is very common for bats to roost in attics, walls, eaves and chimneys of homes. The big brown bat and little brown bat species of North Carolina often make noises just prior to exiting their roost site. They also tend to have a musky odor and commonly leave their droppings (bat guano) underneath their roosting location.

Bats in Raleigh, North Carolina are known to be infected with the rabies virus and other threatening diseases. Although bats generally will not harm you unless provoked, it is best to leave all bat removal services to your local wildlife removal technician. They have the proper training and equipment necessary to safely and humanely get rid of bats occupying your home.

The local bat control technicians of Triangle Wildlife Removal, Inc. in Raleigh and Wake County are Certified Wildlife Specialists with the knowledge and tools to eliminate bats that have invaded your home or business. Bat droppings are called guano, and these differ from mouse droppings because they tend to have a shiny, speckled appearance and cluster together as they pile up. These droppings may contain Histoplasma capsulatum fungal spores which can cause histoplasmosis which can be fatal if spread throughout the body. You should NEVER attempt to clean or remove bat guano by sweeping or vacuuming them.

Bat droppings, along with a bat’s urine can also damage wood by causing an increase in decay if left over a long period of time. Bats emit waste 20-30 times a day and the smell is unpleasant and can attract other pests. Our bat control technicians in Raleigh NC are equipped and experienced in the removal and cleaning of bat waste. Do not hesitate to call our local office and schedule your next appointment at (919) 661-0722.

If you’re looking for a local bat removal and bat control specialist in Raleigh or Wake County North Carolina to remove bats from your attic or to get rid of bats in other locations in your home, give Triangle Wildlife Removal, Inc. a call at (919) 661-0722.