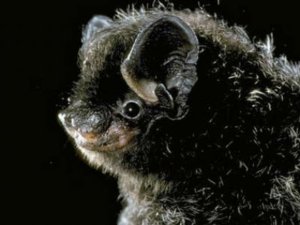 Silver-haired bats are among the most common bats in forested areas of America, most closely associated with coniferous or mixed coniferous and deciduous forest types, especially in areas of Old Growth. They form maternity colonies almost exclusively in tree cavities or small hollows. And like many forest-roosting bats, silver-haired bats will switch roosts throughout the maternity season. Because silver-haired bats are dependent upon roosts in Old Growth areas, managing forests for diverse age structure and maintaining forested corridors are important to these bats.

“Silver-haired bats are medium sized bats, weighing 8 to 12 grams. Measurements of these bats include: total length, 90 to 115 mm; tail length, 35 to 50 mm; wingspread, 270 to 310 mm; forearm, 37 to 44 mm; head size, 60 mm long; and a hind foot length of 6 to 12 mm. Silver-haired bats receive their name from their dark, silver-tipped fur. The fur is usually black in color, however some individuals may be dark brown with yellow-tipped fur. The ears of these bats are relatively short (15 to 17 mm in height), round, and naked. The top of the tail membrane is lightly furred, with 50 to 75% of the tail being naked.”

It is estimated that these bats require snag densities of at least 21 per hectare and often forest management practices have fallen far short of this figure. Unlike many bat species, silver-haired bats also appear to hibernate mainly in forested areas, though they may be making long migrations from their summer forest to a winter forest site. Typical hibernation roosts for this species include small tree hollows, beneath exfoliating bark, in wood piles, and in cliff faces. Occasionally silver-haired bats will hibernate in cave entrances, especially in northern regions of their range. Like big brown bats, the silver-haired bats have been documented to feed on many insects perceived as pest species to humans and/or agriculture and forestry.

“Courtship and mating of silver-haired bats occurs in autumn when both sexes gather together for migration. The embryos do not begin developing during the winter when the mother is hibernating; instead, fertilization happens the next spring. Births occur after a pregnancy of 50 to 60 days. While giving birth, the female roosts with her head facing upward. The tail membrane is bent forward to form a basket, in which the young are caught as they leave the birth canal. Two young are produced, usually between late June and early July.”

Even though they are highly dependent upon Old Growth forest areas for roosts, silver-haired bats feed predominantly in disturbed areas, sometimes at tree-top level, but often in small clearings and along roadways or water courses. Though their diets vary widely, these bats feed chiefly on small, soft-bodied insects. Silver-haired bats have been known to take flies, midges, leafhoppers, moths, mosquitoes, beetles, crane flies, lacewings, caddisflies, ants, crickets, and occasional spiders.