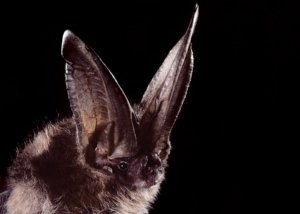 Rafinesque’s big-eared bats are known to form nursery colonies in large hollow trees. Hollow tree roosts provide stable internal environments, protection from predators, and often contain well-insulated areas that form the hot-air traps essential for rearing young. These bats range throughout the southeastern United States from southern Virginia south and west to eastern Texas and northward along the Mississippi River valley to southern Indiana. Their range most closely approximates the historical range of great cypress swamps, indicating that they may have formed a traditional reliance on these areas as roosting and/or foraging sites.

“Corynorhinus rafinesquii is a medium size bat with rabbit-like ears. Their ears are about 1.5 inches long. They are able to curl the ears backwards over the shoulders. Young bats have gray fur, but they acquire their adult fur three months after birth. The adult color of their fur is grayish brown on top and whitish beneath. Each hair in the stomach has a dark brown base and white tips. The hairs in the long toe extend past the claws.”

As much of these swamp-lands have been drained and trees have been harvested, these bats have apparently moved their maternity roosts into old buildings or attics. Rafinesque’s big-eared bats are slow, agile flyers and appear to forage on a wide variety of small, nocturnal insects, especially moths. They hibernate near their summer foraging grounds in old mines, caves, and cisterns.

“Rafinesque’s big-eared bats weigh between 7-13 g. Adult females are heavier than the adult males. The average weight for females is 9.1 grams and the average weight for males is 8.1 grams. Adult bats are only four inches long but they have a wingspan of eleven inches. Rafinesque’s big-eared bats have a prominent nose. Two large facial glands protrude on the side of its snout.”

Though widespread in the eastern U.S., this bat is nowhere abundant and population levels appear to have declined in the past century due to loss of summer roosting or foraging habitat and/or disturbance at winter hibernacula. Rafinesque’s big-eared bats are at special risk where they form nursery or hibernation colonies in caves that are susceptible to recreational disturbance and in abandoned mines slated for closure or reclamation.