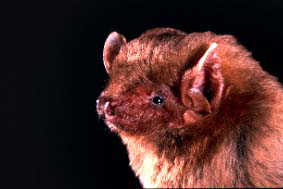 Northern yellow bats have relatively short, rounded ears. The fur ranges from yellowish orange or brown to nearly gray, often with slightly darker tips. Unlike red and hoary bats, only the front half of the upper tail membrane is furred, and there are no white markings on shoulders or wrists. The northern yellow bat is larger than the southern yellow bat. Mating occurs primarily in fall, probably in flight. Twins are typically born in late May or June.

“With a wingspan of 14 to 16 inches and a body length of about 2.8 inches, northern yellow bats are one of Florida’s larger bat species. They typically weigh about 0.5 to 1.1 ounces, and females are larger than males.”

Northern yellow bats live in a variety of mostly coastal habitats that contain Spanish moss or palm trees. They feed on leafhoppers, flies, mosquitoes, beetles, flying ants, and occasional damselflies and dragonflies. These bats roost year-round in Spanish moss or beneath the dead, hanging fronds of fan palms. Residential mosquito spraying appears to threaten this species, as does loss of Spanish moss and removal of old palm fronds. Northern yellow bats are nonmigratory and remain active year-round except for periods of extreme winter weather, during which they become torpid. Northern yellow bats may be seen at dusk, feeding around street lamps and over open areas such as golf courses.

“This species is listed as Least Concern in because of its wide distribution, presumed large population, occurrence in a number of protected areas, and because it is unlikely to be declining at nearly the rate required to qualify for listing in a threatened category.”

Mating occurs during flight in the fall and winter months. Females give birth to one to four, but typically two, pups in late May or early June. Unlike most other species of Lasiurus bats, northern yellow bats have only two nipples. If a female gives birth to more than two pups, usually only two will survive. The pups typically begin flying by June or July. Flying pups feed in groups along with adult females, while adult males feed alone.