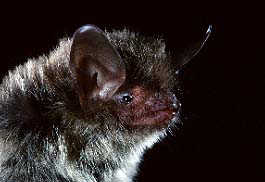 The northern long-eared myotis bat (formerly Myotis keenii), is widely distributed across eastern North America from Manitoba across southern Canada to Newfoundland, south to northern Florida, west through the south central states and northwest to the Dakotas. It is found in dense forest stands and chooses maternity roosts beneath exfoliating bark and in tree cavities, much like the Indiana myotis. And, like the Indiana myotis, the northern long-eared myotis relies upon caves and underground mines for hibernation sites, where it typically chooses cooler sites than eastern pipistrelles and little brown myotis (Myotis lucifugus).

“Like most bats, northern long-eared bats emerge at dusk to feed. They primarily fly through the understory of forested areas feeding on moths, flies, leafhoppers, caddisflies, and beetles, which they catch while in flight using echolocation or by gleaning motionless insects from vegetation.”

Unlike the Indiana myotis though, this species is generally more solitary and is most often found singly or in very small groups. Prior to the arrival of White-nose Syndrome (WNS), northern long-eared myotis were common in the northeastern portion of their ranges, especially in forests during the summer months. Northern long-eared myotis have been heavily impacted by WNS, with losses of up to 98% of populations in some parts of its range. In April 2015, the US Fish and Wildlife Service listed the species as Threatened under the Endangered Species Act. It is likely, that if WNS continues to spread across its range, that northern long-eared myotis will become endangered in the future.

“Breeding begins in late summer or early fall when males begin to swarm near hibernacula. After copulation, females store sperm during hibernation until spring. In spring, they emerge from their hibernacula, ovulate and the stored sperm fertilizes an egg. This strategy is called delayed fertilization.”

Young bats start flying by 18 to 21 days after birth. Maximum lifespan for the northern long-eared bat is estimated to be up to to 18.5 years.

A generalist predator, the northern long-eared bat takes its prey opportunistically using echolocation. It typically catches its prey during flight, and feeds on a variety of insects, including moths, beetles, flies, caddisflies and spiders. This species is most active one or two hours after sunset, and again before sunrise.