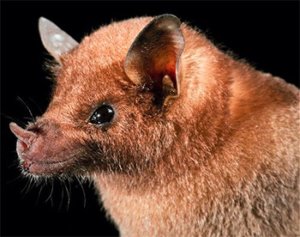 Lesser long-nosed bats (Leptonycteris curasoae) are yellow-brown to gray above, with rusty brown fur on their belly. Their tails are short and their ears are large. Like all members of the leaf-nosed bat family, they have a triangular shaped noseleaf that juts from the end of their noses.

“In 1988 these bats were listed as endangered by the U.S. Fish and Wildlife Service. Maternity roost disturbance and effects of habitat loss are the primary threats for these bats.”

Mexican long-nosed bats synchronize their arrival in Texas with the summer blooming cycle of agave plants on which they rely for pollen and nectar. In Mexico, they also eat the nectar, pollen, and fruit of giant columnar cacti. Like hummingbirds, they hover in front of plants and insert their long noses and tongues deep into the flowers to sip nectar.

In Texas, these bats occur in agave and desert-scrub woodlands at elevations of 4,900 to 7,500 feet. They are seldom found far from the agaves and cacti upon which they depend. These bats are found north of the US border only from June to August. They roost in caves, abandoned mines, and cliff-face cavities in groups ranging from a few to several thousand. Many appear to make relatively long seasonal migrations, remaining active in warm climates year-round. These bats are seldom seen except at night at hummingbird feeders.

Predators such as owls, snakes and bobcats will wait at cave entrances or interiors looking for individuals who have fallen to the ground or those that they can catch in flight.