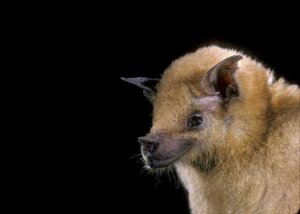 Adult lesser long-nosed bats are yellow-brown to gray above, with rusty brown fur on their belly. Their tails are short and their ears are small. Like all members of the leaf-nosed bat family, they have a triangular shaped noseleaf that juts from the end of their noses.

The lesser long-nosed bat is one of three North American species that feed exclusively on the fruit and nectar of night-blooming cacti including saguaro and organ pipe, as well as many species of agave. They are found in southern Arizona and southwestern New Mexico, and throughout Mexico and Baja California. In the Sonoran Desert of northwestern Mexico, the cardon cactus provides nutritious meals for these endangered bats from the time the cactus blooms in spring through the time when fruits ripen in the heat of summer. In return, the bats provide a valuable service, pollinating the cactus’ flowers, which enables them to reproduce, and then dispersing the seeds of the fruits so new plants can grow.

“In 1988 these bats were listed as endangered by the U.S. Fish and Wildlife service. Maternity roost disturbance and effects of habitat loss are the primary threats for these bats.”

Lesser long-nosed bats are important to the reproductive biology of other plants too. For example, in the absence of bats, the seed set of the agave falls to one-three-thousandth of normal. In 1988, these bats were listed by the U.S. Fish and Wildlife Service as Endangered. Roost disturbance and possible effects of habitat loss such as the over-harvesting of agaves in Mexico represent the primary threats for these bats.