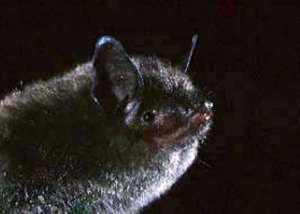 The Indiana myotis was one of the first bat species in the United States to be recognized as endangered by the U.S. Fish and Wildlife Service Endangered Species Act. This listing was largely due to declines recorded at winter hibernation sites in caves, which, until very recently, were the only known roosts for this species. It is now known that in summer, Indiana myotis roost and rear their young under loose bark or in tree hollows. They are found throughout the Eastern United States from the central Midwest and upper New England states, south to the northern Gulf States and into extreme northern Florida. In winter, the largest hibernating populations of Indiana myotis occur in just three states: Kentucky, Missouri, and Indiana, where they form large, highly vulnerable aggregations. Human disturbance and alteration of hibernation caves, loss of summer roosting and foraging habitat due to deforestation, and pesticide poisoning have all contributed to the decline of the Indiana myotis.

“Indiana bats mate during fall before they enter caves to hibernate. Females store the sperm through winter and become pregnant in spring soon after they emerge from the caves.”

Despite protection at overwintering sites, Indiana myotis populations continue to decrease in several portions of their range, indicating disturbance or loss of summer habitat. Because these bats are roosting mainly under exfoliating bark, their summer roosts are short-lived. A continually emerging mosaic of multi-aged trees needs to become available from year to year which can serve as roost sites. Moreover, like many cavity or crevice dwelling bats, Indiana myotis switch roosts often throughout the summer maternity season. Maternity colonies appear to have at least one “primary roost” that is used by the majority of the colony. Over a dozen different “alternate roosts” may be used by portions of the colony intermittently. One reason for this roost switching may be due to differing thermoregulatory needs at different stages of the reproductive process for individuals or as a result of environmental deviations from normal climatic patterns. Additionally, this species is impacted by the devastating disease, white-nose syndrome. Although the degree of loss varies at difference sites across its range, loss from this disease is severe.

“Indiana bats eat a variety of flying insects found along rivers or lakes and in uplands. Like all insect-eating bats, they benefit people by consuming insects that are considered pests or otherwise harmful to humans.”

Bats may also switch roosts due to increased parasite loads or unstable food resources brought on by drought or unusually heavy rains. Much more investigation into the habitat needs of this bat throughout its vast summer range is warranted; including the determination of food habits and foraging behavior. Additionally, this species could benefit from more investigation into the characteristics and densities of maternity roosts, along with continued protection and monitoring of key hibernation sites.