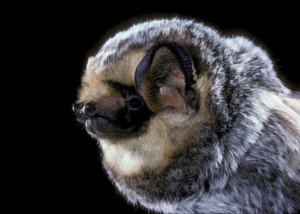 Hoary bats are one of America’s largest and most handsome bats. With their long, dense, white-tipped fur, they have a frosted, or hoary, appearance. Humans rarely get the chance to see these magnificent bats; they are not attracted to houses or other human structures, and they stay well-hidden in foliage throughout the day. They typically roost 10-15 feet up in trees along forest borders. In the summer, hoary bats don’t emerge to feed until after dark, but during migration, they may be seen soon after sundown. They sometimes make round trips of up to 24 miles on the first foraging flight of the night, then make several shorter trips, returning to the day roost about an hour before sunrise. Between late summer and early fall, they start their long journey south, migrating to subtropical and possibly even tropical areas to spend the winter.

“While no longer completely true, more then 100 years after Merriam’s comment, “nothing whatever appears to be known of the breeding habits of the hoary bat,” (p. 179) there is still little information about the reproductive biology of this widespread species. The sexes tend to occupy different parts of the range during the summer months, and therefore, mating probably occurs during the autumn migration, and perhaps during the winter, but no one has witnessed mating, not is the length of the gestation period known. Females bear two (range 1-4) young in June or early July, each weighing 5 g (0.2 oz). The newborns are partially furred, and blind at birth, their eyes not opening until 12 days of age. The young begin to fly at 30-33 days of age, and are independent soon after.”

They have a characteristic slow flight. In the Mammoth Cave region of Kentucky, this species is fairly common in late summer in the flocks of migrating bats. The whereabouts of these individuals at other seasons is unknown. Often the last bat to begin hibernation, it often is the first to leave, by February or March. The last bat to hibernate was gone by February or March. It is active in late winter and hibernates in cold, dry areas near cave entrances (drafty, low humidity, may be subfreezing). These bats feed on mosquitoes, small beetles, true bugs and ants. The longevity record is 12 years. They are found in wild, heavily forested, mountain regions, frequently but not exclusively in caves in hemlock forests. They are known from hemlock forest habitats and from rock falls, caves, mines and rock crevices associated with hemlock forest regions. In summer, it at least occasionally inhabits buildings. Caves and mines are the only known winter habitat. It has been found in mountains rising to 2000 feet.

“Hoary bats leave their roosts to forage 1-5 hours after sunset, feeding closer to sunset early and late in the summer. Little is known about their foraging behavior and diet. They feed over water and around trees, especially forest openings. They frequently eat large moths, but also take other insects such as grasshoppers, wasps, mosquitoes, dragonflies, and beetles. There are two observations of hoary bats attacking eastern pipistrelles, but it is not known is they regularly prey upon smaller species of bats.”