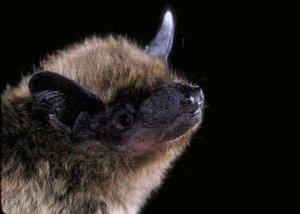 The evening bat is an abundant bat throughout the southeastern United States, northward to the upper Midwest and Ontario. It ranges along the Atlantic seaboard south throughout Florida to Veracruz, Mexico. A true forest bat, the evening bat is almost never encountered in caves. It forms nursery colonies in hollow trees, behind loose bark, and sometimes in buildings and attics. Some of these maternity colonies are quite large, containing several hundred individuals. Evening bats emerge soon after dusk and forage on a large array of small nocturnal insects including flying ants, spittle bugs, June beetles, Japanese beetles and moths.

“Mating probably occurs in late summer and early fall, with the sperm being stored in the uterus of the female during the winter. Ovulation and fertilization occur in the spring. Females give birth to 1 to 3 pups (usually twins) during June.”

In the fall, evening bats store large amounts of fat indicating a lengthy migration to southern parts of its range. In a banded bat recovery study, bats were found as far as 547 kilometers south of their banding sites. Yet, little research has been done to learn exact migration movements of this species. They have not ever been found hibernating in local caves and appear to simply disappear from their summer habitat. Once these bats have arrived at their over-wintering sites, they are thought to remain active throughout the winter.

“The average life span in the wild is probably about two years, although there are records of some individuals surviving for over five years (Watkins, 1972).”

They are known to survive body temperatures as low as 23 degrees F. Their long, silky fur provides extra protection from severe cold, and they also use their heavily furred tail membrane like a blanket, wrapping themselves up almost completely. While in hibernation, red bats respond to subfreezing temperatures by raising their metabolic rate to maintain a body temperature above their critical lower survival limit.