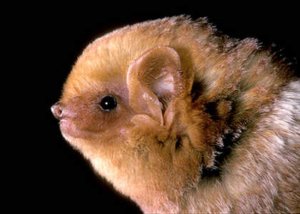 Eastern red bats are North America’s most abundant “tree bats.” They are found wherever there are trees east of the Rocky Mountains from Canada to as far south as central Florida. Eastern red bats roost right out in the foliage of deciduous or sometimes evergreen trees. Despite their bright red color, these bats are actually rather cryptic, looking like dead leaves or pine cones. They are perfectly camouflaged as they hang curled-up in their furry tail membranes, suspended from a single foot, twisting slightly in the breeze. For the most part, red bats are solitary, coming together only to mate and to migrate. Females even roost singly when rearing young. Unlike most bats, Eastern red bats often give birth to twins and can have litters of up to five young, though three young is average.

“Female Eastern Red Bats give birth to one litter of twins each year, unlike most bats which give birth to single young. Newborn bats are hairless and weigh approximately 1.5 g.”

During the day, pups hold on to their mothers with one foot and on to a perch with the other. Mothers leave their young alone at night when they go out to feed, but if necessary, they will move them to new locations. Pups begin flying at three to four weeks and are weaned only a few weeks later. In the summertime red bats are among the earliest evening fliers, typically feeding around forest edges, in clearings, or around street-lights where they consume predominantly moths. In the fall they perform long-distance migrations using the same migratory routes along the Atlantic seaboard as many birds. In the late 1800s, there were reports of large migratory flocks passing over in the daytime, but no such sightings have been made this century. Very little is known about their winter habitat or behavior. In some areas of the southeastern U.S., Eastern red bats have occasionally been encountered flying up out of the leaf litter in advance of prescribed burns done during the late fall.

“The young learn to fly at about five weeks old. Like all mammals, female red bats nurse their young until the young are able to fend for themselves. It takes young red bats about five weeks to learn how to fly and forage on their own (Myers and Hatchett 2000).”

They are known to survive body temperatures as low as 23 degrees F. Their long, silky fur provides extra protection from severe cold, and they also use their heavily furred tail membrane like a blanket, wrapping themselves up almost completely. While in hibernation, red bats respond to subfreezing temperatures by raising their metabolic rate to maintain a body temperature above their critical lower survival limit.