The long-term solution for bats that enter buildings and cause a nuisance problem or present a public health hazard is to systematically repair the structure. Chemical toxicants never solve house bat problems and often create different, more dangerous problems. This section describes bat-proofing techniques that when used in conjunction with an effective bat house will effectively deal with house bat problems. Recent declines in bat populations and greater appreciation of the ecological importance of bats have led to this solution which encourages bat conservation, protects human health, and permanently solves nuisance problems.

The following are typical steps involved in the bat exclusion process to humanely remove bats from your attic or home and prevent them from reentering again. This process is also referred to as bat-proofing.

1)  Once the bat inspection process is completed – it has been determined where all the possible entry holes into the building are located, the primary entry and exit areas were identified and the holes and gaps that the bats aren’t actively using are sealed – you’ll move forward in repairing the areas that show bat damage using the proper materials.

2) The species of bat is determined during your bat inspection process, by observing them in the attic, by watching them fly out of the house at dusk, and by examining the bat poop that you see in the attic or the ground below the entry holes. Research should be done when they have their young (summer for all species), so that you don’t do your exclusion during the bat maternity season. The bat birthing period for most areas is May – July. So goes the saying, “May through July – let them fly.”

3) The proper exclusion device should be set on the bat exit gaps and holes. Here is the general principle: the device is set on the exit hole/gap in such a way that the bats are able to naturally exit the building as they always do. They have to crawl out and fly out or flutter down through the device. They won’t exit the building if there’s an obstruction in the way. In addition, the device must be configured so that the bats are not able to fly back in when they attempt to return. It all has to do with the way bats take off and land. It’s difficult to describe, and this is one of the reasons experience really helps in a successful exclusion.

5) After you are sure all the bats are out, remove the exclusion devices and seal the final holes/gaps shut. 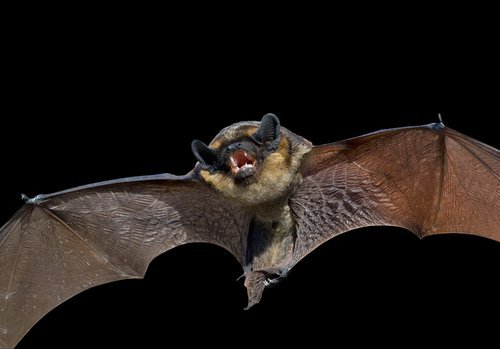 1/4 inch poly netting is a good all-purpose bat net with a small enough opening to prevent the bats from getting stuck in the mesh or strangled. It must be set to allow the bats to fly out but not fly back in. Making this shape right is an art, like sculpture. I usually set netting on long gaps with clear exit routes. Although bat netting can be quickly installed, we have seen its use result in the death of many bats. I don’t personally like bat netting and those that use it should be trained on how to properly install it.

Window Screen -the softest you can find, makes a great exclusion tool. As with the netting, a combination of staple gun or duct tape is a good way to secure it to the house. We usually use screening on smaller gaps adjacent to flat surfaces. Like bat netting, it needs to be installed properly to prevent bats from reentering their roost site.

Funnels – funnels made of various materials, from clear plastic to 1/4 inch steel screening, work very well in some scenarios. Funnels aren’t used if there are a lot of bats, because of the bottleneck (figurative, not literal, the neck of a bottle would be too narrow). In large colonies this bottleneck can cause bats to panic and abort their attempts to exit the structure.

Bat Cones – these are special funnels with a tapered body and attachment wings that you can purchase online. The use of bat cones is also known as bat venting. Like all bat removal devices they need to be installed properly to ensure that the bat colony is properly vented from the structure. These devices are sometimes referred to as bat pipes or bat tubes.

NOTE: Some websites suggest that to get rid of bats all you need to do is wait for them to exit the structure at night and then seal all entry and exit points. This is bat advice! All bats don’t exit a structure every night and they all don’t exit at the same time. During the bat birthing season there may be flightless baby bats present that cannot exit the structure.  Using this approach will most certainly result in bats being trapped in the structure and possibly force them into the living areas of the home.  See our page, Best Way To Keep Bats Out Of A House.

National listing of certified bat removal professionals for all 50 States in the U.S.
FIND A BAT REMOVAL PROFESSIONAL IN YOUR AREA